‘Because I am not an activist. This isn’t what I do. I’m a relatively normal, middle aged chap who does clicktivism when he can find the time. Direct action is not my thing. I’m not cut out to be here, running with hundreds of people across the fields of the Rhineland to try and close for one day a sodding great lignite mine.’ Ben Winston, 2015.

Ben Winston, a ‘normally normal chap’ was a father, filmmaker, photographer and climber from Sheffield, who attended the Climate Camp in the Rhineland in August 2015. Prior to the camp he had never taken part in direct action, and neither had many of the others who attempted to enter and occupy the Garzweiler lignite mine in the west of Germany as part of Ende Gelande (here and no further). Winston’s visceral account of his experiences, alongside many others’ testimonials and striking images, have since contributed to Ende Gelände becoming an iconic anti-coal action.

In the week leading up to the occupation over around two thousand people from around the world travelled to the Rhineland to participate in a Degrowth Summer School and Climate Camp located on farmland nearby the mine. Operated by RWE (Rheinisch-Westfälisches Elektrizitätswerk AG), Garzweiler is the largest open pit mine in Germany at around 48 square kilometres and expanding. Taking its name from the first town it absorbed (McDonnell, 2014), the mine is projected to operate until 2045 to extract the 1.3 billion tonne lignite deposit (RWE, n.d.). 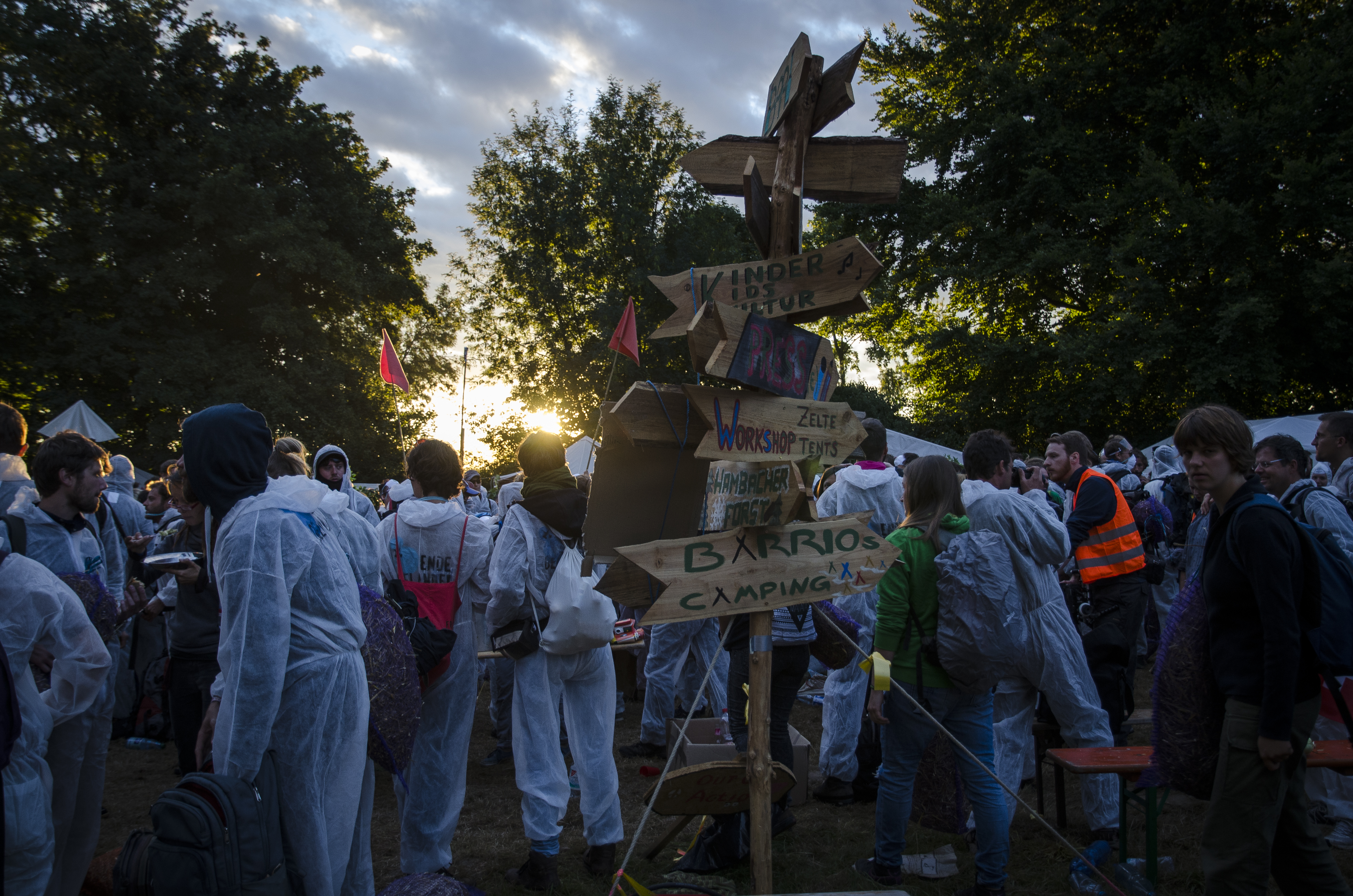 Before 7am on the morning of Saturday 15 August, protesters set off from the Climate Camp towards the pit, determined to break through more than one thousand heavily armoured police and RWE security blockades that sought to prevent them. The protesters, all wearing white boiler suits had split into several smaller groups or ‘fingers’ of around two hundred people who attempted to enter the mine simultaneously from different directions. The first major obstacle protesters had to negotiate was a major highway. Abseilers dropped a banner from an overpass forcing authorities to close the motorway and thus providing a window for the fingers to pass, and also indicating a high degree of strategy and sophistication amongst the movement.

Pushing through police truncheons and pepper-spray, activists had only hay-filled pillows, plastic visors and paper masks for protection. 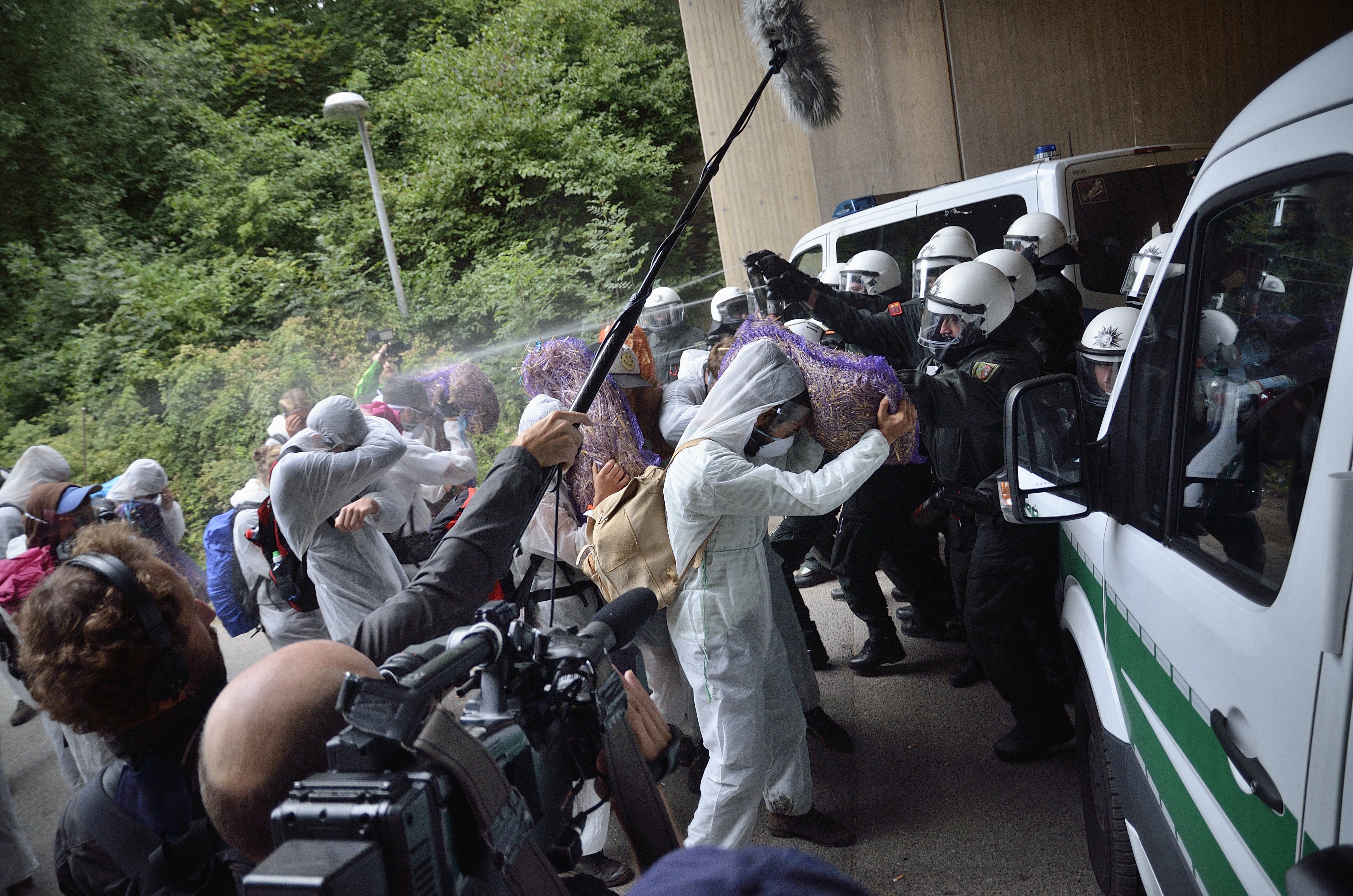 The eight hundred or so activists who successfully entered the pit were chased, surrounded, arrested and held for several hours. One group was successful in reaching and climbing onboard one of the enormous bucket-wheel excavators, known as Baggers. 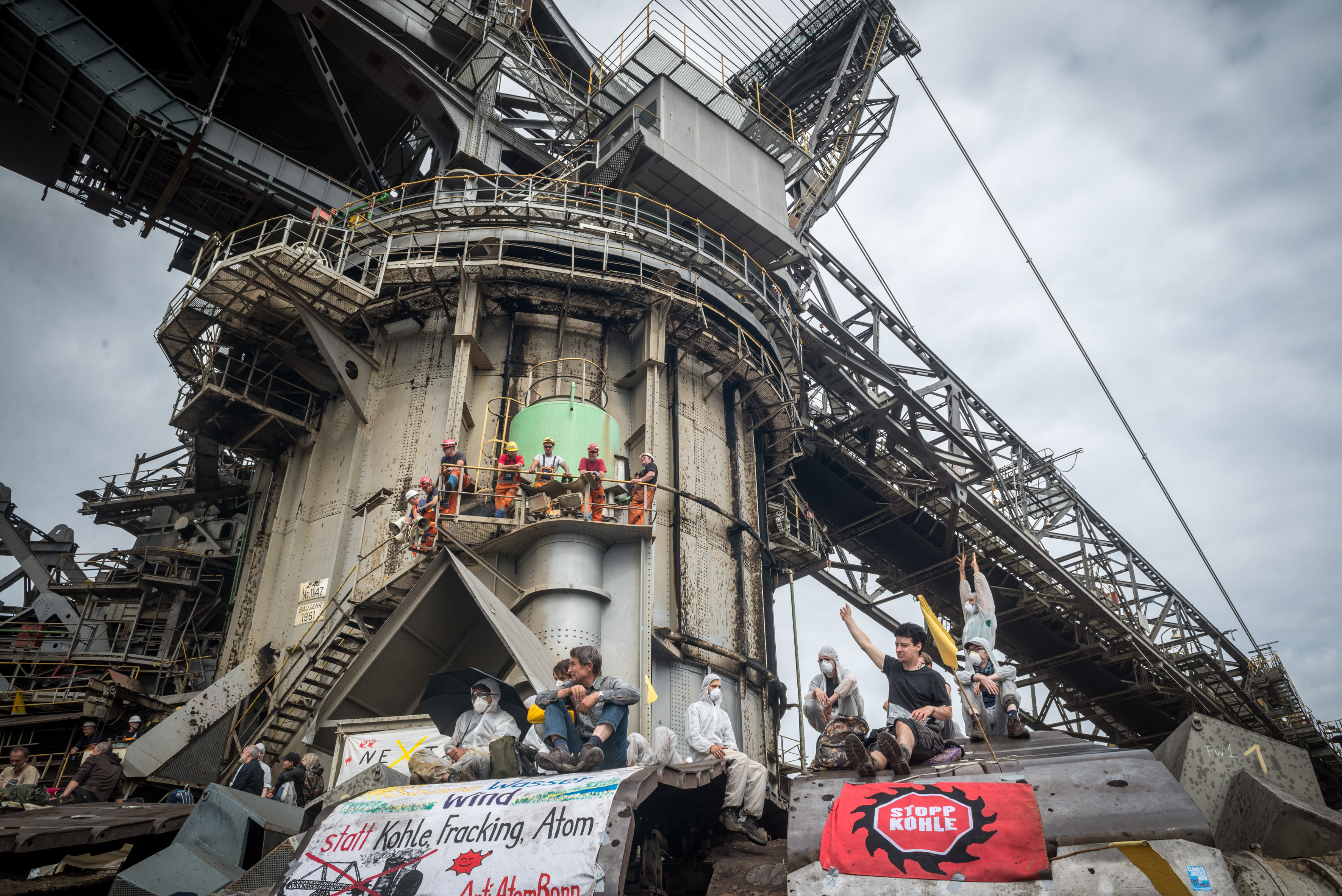 The seasoned activist and artist John Jordan (2015) writing in The Guardian recalls:

In total, around 800 of us were arrested, and hundreds of us refused to cooperate with the authorities by withholding our names and IDs. This hampered the bureaucracy so badly that we were released without charge. It was the world’s largest act of disobedience against the mining of fossil fuels—and it might be the spark that ignites a rising, cross-border movement of disobedience for climate justice.

Jordan emphasises that entering the pit was not simply a symbolic gesture, but an action that targeted the very source of the problem and prevented production, if only for a day (Jordan 2015). According to RWE 35–40 million tonnes of coal are extracted from Garzweiler each year.

We are the investment risk.
Ende Gelände will converge again in May 2016, this time at the Lusatia coal fields in the east of Germany operated by Swedish state-owned energy company Vattenfall. Recently the company announced it would sell its lignite business to a Czech consortium of energy companies, EPH (Energeticky a Průmyslovy Holding), in its efforts to shift towards renewables. Vattenfall CEO, Magnus Hall, indicates this is due to policies such as Germany’s Energiewende engineering a demand for clean-energy:

As an international energy company with the ambition to be one of the leaders in the new energy landscape it is important for us to take an active part in the German ‘Energiewende’. Germany will remain an important market for Vattenfall. It is not only one of the largest energy markets in Europe, but also a frontrunner in the energy transition. (Hall cited in Tunnicliffe 2016)

According to a report in the industry publication, The Chemical Engineer, the sale price for the Lusatia lignite mines has not been disclosed, however it will be recorded as a ‘write-down’ in Vattenfall’s forthcoming income statement. The company claims the sale will financially have a ‘lower negative impact’ than if it retained the business.

Dorothee Häussermann (2016) a spokesperson for Ende Gelände points out that regardless of the sale, the coalfields will continue to operate until 2045 with the new investors demanding planning security for decades to come. This year Ende Gelände has declared: ‘We are the investment risk,’ signalling to EPH and other investors that coal assets are now bundled with a ‘wildly determined resistance movement.’ 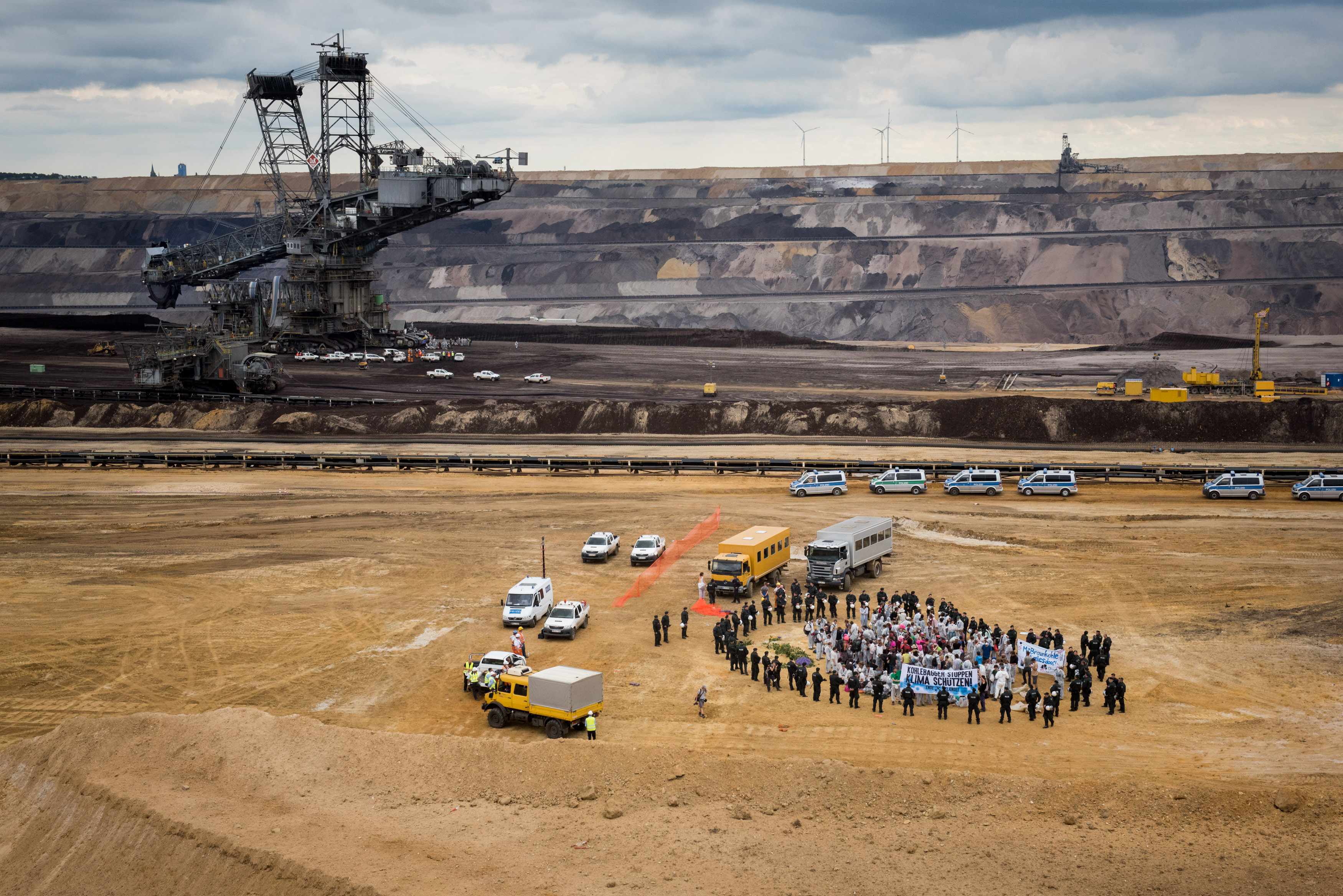 Haussermann, Dorothee, 2016. ‘The blind spots of the German energy transition — 2nd round for Ende Gelände,’ The Norwich Radical, 13 April.

Jordan, John, 2015. ‘The day we stopped Europe’s biggest polluter in its tracks,’ The Guardian, 27 August.